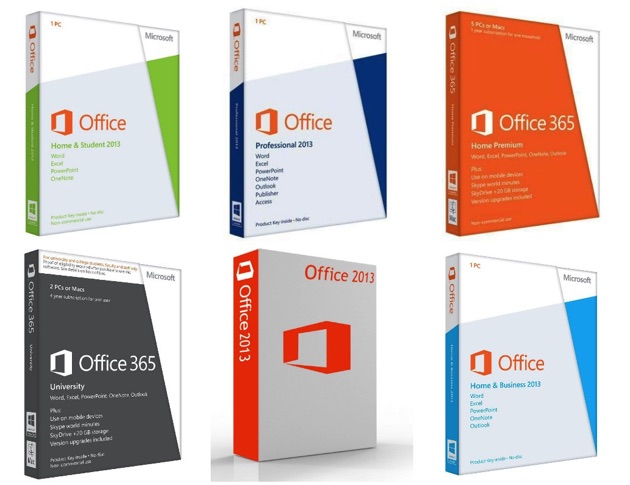 After all the fuss about the release of Windows 8 has calmed down, Microsoft launched another software package—the latest Microsoft Office version. However, unlike in the previous years wherein you will only had to choose between the Home and Professional version, the latest package had Office 2013 and Office 365 variants.

Let’s see below the major differences between Office 365 and Office 2013. To give you an idea of what to expect let us just mention here that one is rented while the other one is owned.

Although Office 2013 and Office 365 have a lot of similarities, the 2013 Suite is actually the official and natural successor to the Micosoft Office 2010 package. To be able to make use of this software, you will have to pay a one-time charge, install it on your computer, and it’s all yours.

Just like when purchasing other software applications, you are allowed to install this package on only one computer (unless of course you buy more licenses). Moreover, just like in the previous versions of Microsoft Office, you can also choose from several editions that include different features.

In order to guide consumers accordingly, the official Office website of Microsoft lists the features of the Office programs included in each edition. Furthermore, it explains the difference between the 365 and 2013 Office suites, as well as other common areas of confusion.

The prices of the different suite versions range from $139.99 to $399.99, depending on the Office applications included in the package.

Microsoft is frequently criticized for only making minimal modifications in their different versions of the Office suite. Aside from the modern feel and the touch screen support featured in this latest Office suite, the main addition is the convenient online sharing and other cloud options. Files created using the different Office 2013 programs can be saved directly to OneDrive, which is Microsoft’s secure online space.

Other changes in the Office applications include:

Unlike in the Office 2013 suite where you will only have to pay a single fee, Microsoft Office 365 involves paying monthly or yearly  subscription fees. Simply put, you are just renting the package. Aside from the difference when it comes to the payment scheme, Office 365 also allows subscribers to use the software on up to five computers for a single price (Office 2013 only allows one computer per copy).

The monthly subscription fee of Office 365 is as low as $5.99 and aside from gaining access to the various Office programs, you will also be entitled for a 1 TB storage space in OneDrive and 60 minutes free Skype calls every month when you subscribe in Office 365.

Although online software applications in general are not something new to computer users, making use of an online version of the Microsoft Office package is somewhat a major transition. With this, many would obviously want to try it out first before committing and paying the subscription fee.

Microsoft allows interested users to test drive Office 365 for free within one month just for them to see how it’s like. Although the trial is completely free of charge, you will be required to provide your payment details in case you want to subscribe and keep using the software after the free trial. Just a piece of advice though, if you are just curious and are not actually planning to subscribe, it is best to mark your calendar when the free trial will end so you wouldn’t get charged.

Advantages and Disadvantages of Office 365

One of the main advantages of subscribing to Office 365 is that you can save a huge amount of money if you have more than one computer in your household or business. Instead of purchasing a copy of Office 2013 for each unit, you can just pay a monthly subscription covering more than one user for a good price. Another benefit of subscribing to Office 365 is that more updates and exclusive features are available compared to Office 2013.

However, unlike in Office 2013 wherein you can choose to purchase individual programs, you cannot subscribe to just a single application in Office 365. Because 365 always come in packages, some people might feel that they are paying for programs and services that they do not use.

No matter which Office suite you choose, you will have the chance to work with the new user interface and menu options. It is important to remember that each software package version is designed for people with varying needs. With this, it is all up to you to decide which one to purchase because no one knows your needs better than you do.

96% of our students pass their certification on the first attempt with our camps.